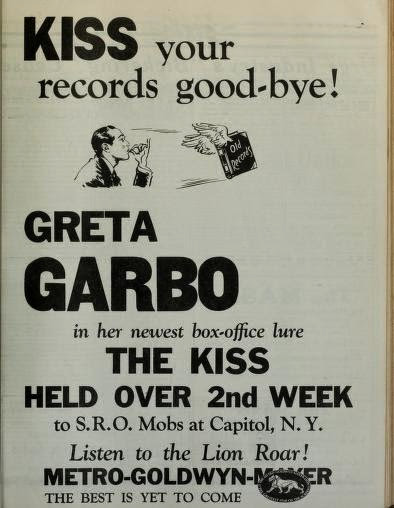 Photoplay magazine during 1931 used two full pages to exhibit one photo of Jacques  on the set to follow the director into the sound era in American film. It was a scene from his film "Daybreak", starring Ramon Novarro. The caption explains that the camera was "mounted on a rubber-tired 'dolly' for the making of traveling shots Jacques Feyder, director of Garbo's 'The Kiss' is the boss. He's at the extreme left, seated from the bottom." Film periodicals had counted on there being interest in the offscreen lives of film stars and in how they might put together a sound film, the extra-textual discourse embroidering distant super luminaries into the conversations that were held after the audiences left the public sphere of the theater and entered the fantasy objectifications of spectatorship that to some of the public may have seemed to be merely an ordinary walk home from the theater; and for theater goer Greta Garbo they may have been.
A publicity still published in Picture Play magazine during 1929 kept the caption, "Miss Garbo, at top of page, unhappy in the midst of luxury, reflects on how little life holds." Interestingly, although Greta Garbo in a low cut dress directing the view of the spectator to where she might not be wearing a bra is in front of a dressing room mirror it is not strictly a mirror shot in that she is also photographed in quarter profile as though nearing over the shoulder to effect a double image. P

Greta Garbo
Greta Garbo written by Scott Lord on Silent Film at 12:47:00 AM