Swedish Silent Film scholar Bo Florin makes note of the province held by Nils Bouveng at the newly structured Svenska Filmindustri after the merger had taken place of the smaller companies into one and that Bouveng had published an article entitled Swedish Film Advertising: How the Industry Plans to Conquer the World in the 1919 periodical Filmjournalen. Nils Bouveng of Swedish Biograph was very much responsible for the distribution of Swedish silent film in the United States. The publication Exhibitor's Herald during 1921 noted that although Bouveng was deemed to have thought the film market overcrowded, he would still export film "of merit" to the United States. It wrote,"Swedish Biograph has control of all product of Scandinavian studios and will offer only the cream of these pictures to American theaters...While Thy Soul Shall Bear Witness is regarded as its finest offering, company executives believe that Judge Not, Sir Arne's Treasure, Youth Meets Youth, Dawn of Love and Secret of the Monastery will compare favorably with any American made production." Actors that were anticipated to greet audiences in the United States included Mary Johnson, Gosta Ekman Renee Bjorling, Tora Teje, Edith Erastoff Lars Hanson, Karin Molander and Victor Sjostrom.
Scandinavian films were often peered at by American and British film magazines and for thos looking for film rveiews, extatextural discourse on European films can often be located within them. Picture Play Magazine during 1921 looked at the theater screens of Sweden. "Lars Hanson, a star of the Swedish constellation may be added to the European counterparts of American stars. Lesley Mason denominates him 'the Charles Ray of Sweden' and considers him the best male bet of Europe so far as American popularity is concerned. The most popular of the Swedish feminine stars, according to Mr. Mason, are Tora Teje, Karin Molander and Mary Johnson. During the following year, 1922, the periodical Picturegoer magazine in fact recognized actress Mary Johnson as being the leading actress from Sweden in an article about actors known internationally and transnational cinema but opined that as a foreign celebrity she entertained a more subdued fame, as though to denote a lack of commodification of the female in extratextural discourse, ie. exploitation. "Although she rejoices in the title of 'Sweden's Sweetheart", loveable, little Mary Johnson has never recieved a 'fan' letter from Sweden. The reason is extremely simple. There are no 'fans' there. The star, as a star and personality, simply doesn't count. The Swedish picturegoer is very critical as to story, technique and acting and highly appreciative too; but as to writing to the movie stars- perish the thought." Author Walter Bloem, in his volume The Soul of the Moving Picture from 1924, in a discussion on The Scene, singled out two Swedish Silent Film actresses by briefly mentioning Karin Molander and Tora Teje as having "the psychic power which spells variety in the creation of character" as contrasted with a plentiful supply of American actresses that presented "a soporific drama of a single sorrow or grief or pain, of a conventional melancholy, sadness or lament." Author Benjamin B. Hampton to the contrary, in his volume A History of the Movies, published during 1931, seems to transverse the period following the Golden Age of Silent Film as though from 1925-1930 were stagnant, typifying Swedish Silent Film as tendentious. "The Scandinavians, despite fine actors and directors, lean so frequently toward gloomy, sophisticated stories, that they have been negligible factors in production as far as production is concerned." Hampton overlooks that this is exaclty what helps to account for the film made in Sweden after 1925 having been attempts at commercial success through light hearted comedies. 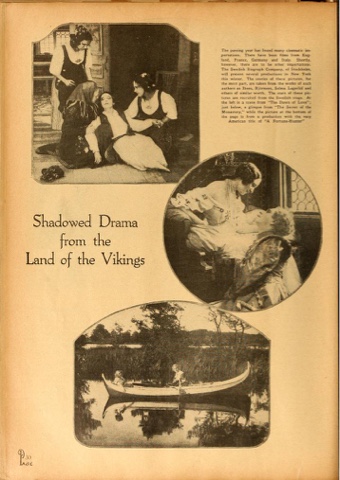 During 1921, the periodical Motion Picture Magazine reported there would be an increase of importations from Stockholm and while it featured still photographs from the films Dawn of Love, The Secret of the Monsastery and A Fortuned Hunter, it marked that the storylines we're to be adaptations from the literature of Ibsen, Bjornsen and Selma Lagerlof and that the principal players had come from the Swedish theater, which aptly describes the way in which actress Greta Garbo would be introduced to Swedish film audiences two years later.

Swedish director Ivan Hedqvist during 1919 directed the Svenska Biografteatern film "The Downy Girl"(Dunungen) from a play by Selma Lagerlof, the film having starred Renee Bjorling, Jenny Tschernichin-Larssen and Mia Grunder in her first appearance on the silent screen. Among the films produced by Filmindustri Skandia during 1920 photographed by Raol Reynolds and directed by Rune Carlsten was the film "The Bomb" ("Sunshine and Shadow", "Bomben"), starring Karin Molander and Gosta Ekman. Actress Karin Molander had starred in the lost film "Surrogatet" during 1919, the being no surviving copies of the film. A short film lasting only slightly over a half hour, it was directed by Einar Braun for Filmindustri Scandia, Stockholm. Rune Carlsten in 1920 wrote and directed the film "A Modern Robinson" ("Robinson i skargarden") with actress Mary Johnson. The cinematographer to the film was Raoul Reynolds. Actress Mary Johnson married Norwegian actor Einor Rod after having appeared with him in the film. Director Rune Carlsten that year also directed Mary Johnson with Tora Teje and Hilda Castegren in "Family Traditions" ("Familjens traditioner") which he cos ripted as well, his co-author having had been being Sam Ask. The film was produced by Svensk Filmindustri and photographed again by Raoul Reynolds. 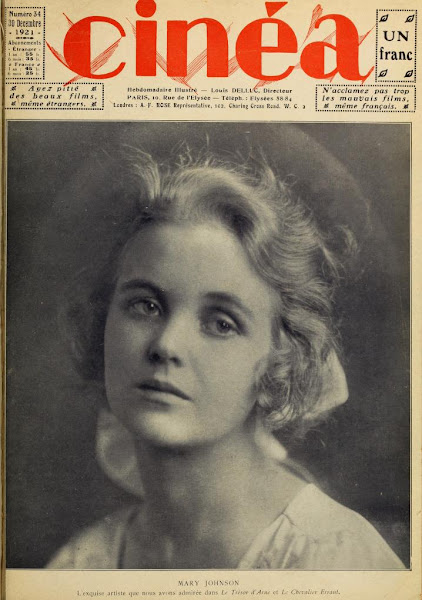 Peter Cowie, in his volume Scandinavian Cinema chronicles the end of the silent era in Sweden as being a time of less output, "Swedish film production declined through the 1920's, reaching a nadir in 1929, when a mere six features were released."
Danish Silent Film