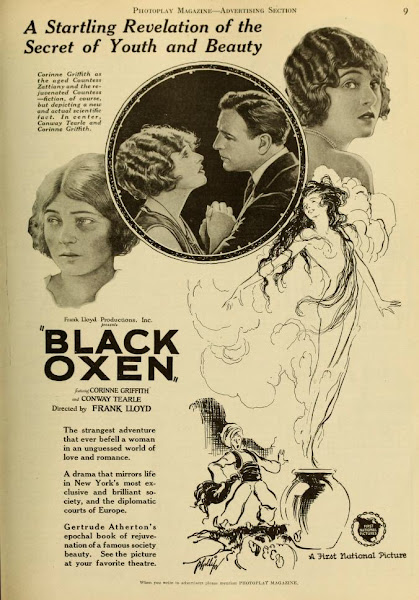 Claimed to have been a "sensation" by writers of the period, "Black Oxen" was directed by Frank Lloyd, who co-wrote the script with Mary O'Hara as an adaptation of a then recent, then controversial novel by Gertrude Atherton. Atherton took the title from a phrase from poet William Butler Yeats. The film stars actresses Corinne Griffith and Clara Bow. Screenland magazine reviewed the film during November of 1923. "The passing years are like black oxen, wrote Gertrude Atherton, plodding on relentlessly. The heroine of 'Black Oxen' is a famous beauty who successfully renews her youth, thereby creating a new world for herself, far from her old loves and dreams." SILENT FILM SILENT FILM SILENT FILM
Greta Garbo written by Scott Lord on Silent Film at 9:07:00 PM