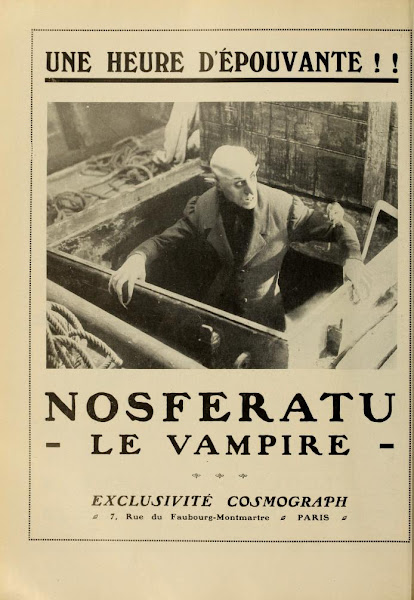 The film adaptation of Robert Louis Stevenson's account of Dr.Jekyll and Mr. Hyde directed by F.W. Murnau during 1920 is presumed lost, with no known existing copies of the film. "The Head of Janus" (Der Janus Kopf, Love's Mockery) had starred Conrad Veidt amd Bela Lugosi and is credited with having been one of the first films to include the use of the moving-camera shot. F.W. Murnau made 21 feature films, 8 of which are presumed lost, with no surviving copies. Included among them is the 1920 horror film "The Hunchback and the Dancer" (Der Bucklige und die Tanzerin) photographed by Karl Freund.
Lotte H. Eisner, in his biography titled Murnau, looks at a scene change to the shooting script of "Nosferatu" written by Henrik Galeen made by the director, F.W. Murnau, but adds that few additons and revisions to the original script were made by Murnau. "Sometimes the film is different than the scenario though Murnau had not indicated any change in the script...But there is a suprising sequence in which nearly twelve pages (thirteen sequences) have been rewritten by Murnau."
Lotte H. Eisner analyzes the film "Nosferatu" in his companion volume to his biography of Murnau, The Haunted Screen. "Nature participates in the action. Sensitive editing makes the bounding waves foretell the approach of the vampire." Eisner later adds, "Murnau was one of the few German film-directors to have the innate love of the landscape more typical of the Swedes (Arthur von Gerlach, creator of Die Chronik von Grieshums, was another) and hes was always reluctant to resort to artifice."
Lotte H. Eisner, in her volume Murnau, writes, "As always, Murnau found visual means of suggesting unreality". Professor David Thorburn, Massachusetts Institute of Technology, expresses aprreciation and gratitude for the author's writings pointing out that "her arguments in The Haunted Screen are still widely accepted." In regard to the expression of unreality, David Thorburn sees Expressionism as having been typified by "distortion and surreal exaggation" as well as having been "interested in finding equivalents for he inner life, dramatizing not the external world, but the world within us."
Silent Film Silent Horror Film Faust (F.W. Murnau, 1926)
Greta Garbo written by Scott Lord on Silent Film at 9:49:00 PM