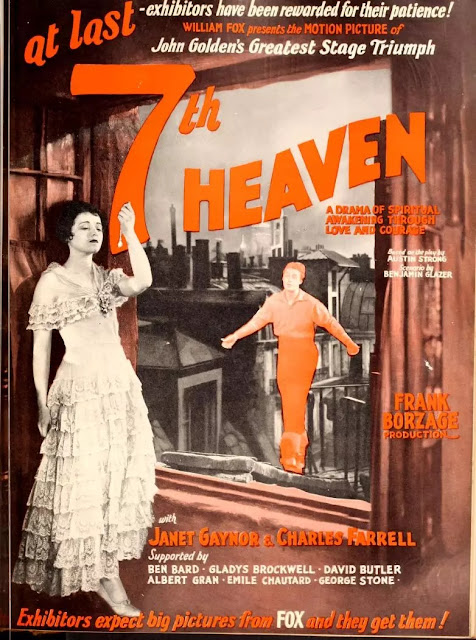 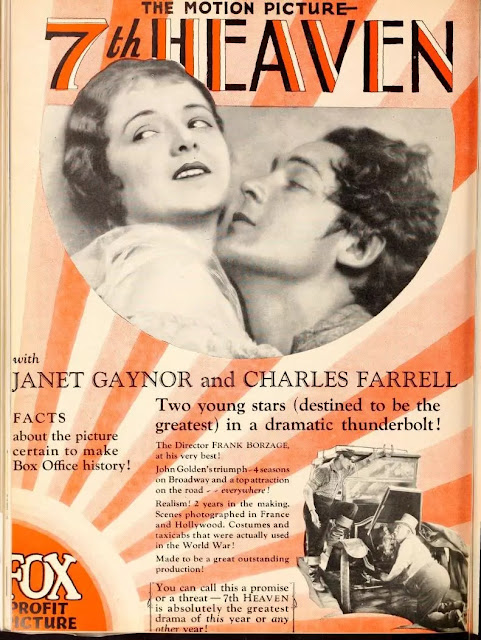 The Film Daily magazine during early 1928 made one of its many pertinent announcements entitled Janet Gaynor Goes Abroad, which read, "Janet Gaynor, who recently signed a five year contract with Fox, will leave for Europe upon the completion of 'The Four Devils', F.W. Murnau picture, to work in exteriors for 'Blossom Time' with Frank Borzage directing. 'The Four Devils' went into production Friday."
The Four Devils, directed by F.W. Murnau, is a lost silent film, with no available surviving copies. Picture Play magazine reported having had an interview with Janet Gaynor early that year. "The other week I came across Janet Gaynor on the Fox lot...'I have to get used to doing these stints and turns. That is if I don't twist myself into something that can't be undone.' This she explained her role in 'The Four Devils'. Nevertheless risking all when such dire mishaps, Janet continued to work on her contortions. When Hollywood learned that Janet Gaynor and Charles Farrell were chosen for the leads in 'Blossom Time' and that part of the picture might be filmed in Vienna, the Cinderella chorus sang once more." In the article, almost now seemingly out of place while below a picture of a bare shouldered actress turned so that her chin touched her shoulder demurely, was a caption which read, "Nancy Drexel was long obscure before she was given a leading role in 'The Four Devils", the age of the actress in the photo implying that her initial fame had only been fleeting.

I was asked during an online course of film to view the silent film Street Angel starring Janet Gaynor. The instructor of the course, Professor Scott Higgins of Wesleyean University has recently written two papers, Technicolor Confections and Color at the Center.

There is an astonishing relationship between lost film, films which there are no longer prints of due to the celluloid having deteriorated, and the history of technicolor films; even up untill the 1935 film "Beck Sharp" there were two-tone and three-tone inserts, including a 1923 adaptation of "Vanity Fair" directed by Hugo Ballin that is incidentally a lost film.
"So This Is Marriage?" (Hobart Henley, 1924) starring Conrad Nagel and Eleanor Boardman is a lost film that contained technicolor sequences.
One consideration in the use of Technicolor during the production of silent film was running length and how expensive, or perhaps lucrative, it would be to advance from two-reefers to seven feelers. The four reel film had been introduced over a decade earlier and with it the narrative film had become to be expected in movie theaters. While John Gilbert and Greta Garbo were being reviewed in magazines for their acting in the film "Love", so we're Olga Baclanova and David Mir for the film The Czarina's Secret. The Film Spectator reported,"The Czarist's Secret is another artistic gem of the series that Technicolor is making for Metro release. There are to be six, each presenting a great moment in history, and this is the fourth....Dramaticly it is a splendid picture and the technicolor process has made it gorgeous pictorially. technicolor has brought its process to a point of perfection that our big producers cannot ignore much longer. They cannot keep giving us only white and black creations with such a color process is available." Actress Olga Baclanova later costarred with John Gilbert and Virginia Bruce in the impeccable early sound film "Downstairs".
Technicolor and artificial lighting were used in tandem the first time in 1924 by director George Fitzmaurice to bring Irene Rich, Alma Rubens, Betty Bronson and Constance Bennett to the screen in the film "Cytherea". Admittedly, an early pioneer of Technicolor described the film as two component subtractive print that had only been used as "an insert", but that in that it had been the "photographing of an interior set on a darkened stage" the silent film director had been "delighted with the results". 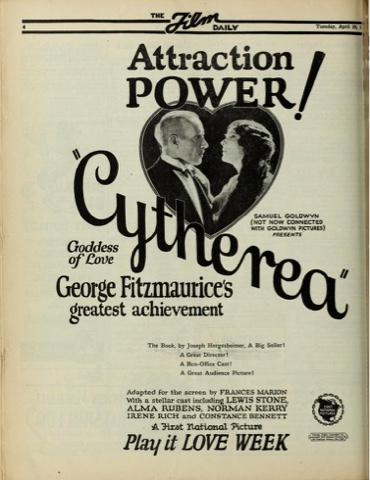