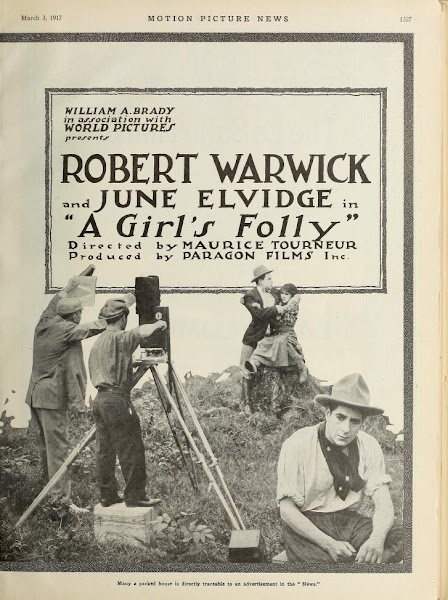 The caption to the review of "A Girl's Folly" in the periodical Wid's Films and Film Folk during March 1917 read "Bad Moral and Tells Secrets, But Will Get Money." It elaborated further with "Very interesting, but tells studio secrets, which is dangerous," if that too can be deciphered by a modern audience sauntering through the cannon of silent films left remaining that have not yet deteriorated over time. The periodical then went so far as to, half-heartedly or not, suggest that "exhibitors", theater owners, should "protest" the film's having divulged what were "backstage secrets". The periodical admittedly was looking for the exploitation of silent films but it takes a historian's glance to decided if there was a sensationalism on which the reviewer may have counted during an extratextural discourse. It continued to question "purely from the viewpoint of whether you can get money with it" and conceded, "The thread of the story is quite slender and has a very questionable moral as presented, but the introduction of scenes showing clearly activity about a film studio is sure to prove exceptionally interisting to any film fan." It offerred the theater owner consolation, "Since the producer has already gone and 'done it', I presume you might as well go ahead and get the money with this, because it would be impossible to eliminate the back-stage scenes and have a picture left."
The photoplay was cowriiten with director Maurice Tourneaur by Frances Marion and starred actresses Doris Kenyon and June Eldvidge. Frances Marion that year also wrote the photplays to to the films Rebecca of Sunnybrook Farm and Poor Little Rich Girl both starring Mary Pickford. Silent Film Silent Film
Greta Garbo written by Scott Lord on Silent Film at 10:25:00 PM